Now that I have the most essential undergarment done, I can plunge head first into the 18th century! 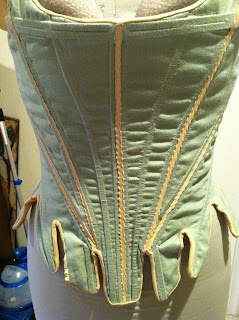 I used the JP Ryan half-boned stays. I don't really love the pattern, or the results. I don't think it shapes enough for my taste, and the instructions are inaccurate. This really marks the beginning of my love-hate relationship with the JP Ryan pattern line. Also, I feel that the neckline is too narrow, and I'd prefer if the straps tied in front. I'm not really a fan of needing other people to lace me up.

I don't think they give my form a conical enough shape, so I suspect I'll be doing most of the fitting for 18th century garments on my self. Next pair is going to be fully boned, and I'm going to probably use a Nora Waugh pattern from Corsets and Crinolines. 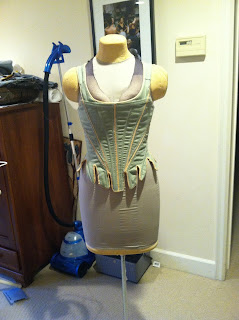 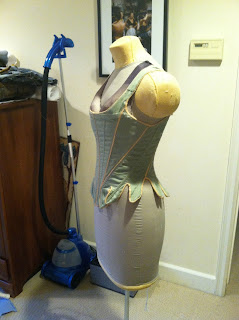 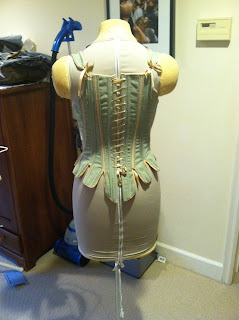 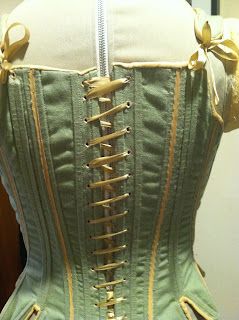 They're made from 3 layers of linen; nice linen on top, linen canvas in the middle and a slightly less nice linen for the lining. I hand stitched all of the channels, boned with 1/4 inch flat reed, and bound with leather. I pretty much threw out the pattern instructions and put it all together the 18th century way. I should use linen tape to lace, but I'm using poly ribbon because it's strong and slippery which makes lacing myself easier.

I have a LOT of outfits planned for Costume College this year. I don't know how it's all going to get done in time. I'm making more 18th century things than anything else, mainly by virtue of laziness and wanting to do minimal hairstyle changes. Saturday is my 18th century day, and it's looking like the Ice Cream Social might go 18th century as well. I'm going to break down my plans by day and events: 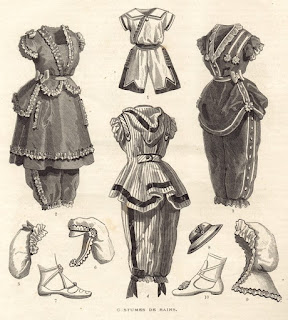 1870s bathing suit for the Victorian bathing suit group. I'm going to be making the ruffly one on the left, and a cap. Bathing slippers will maybe happen if I have the time. I'm planning to use the 1870s suit pattern from Ageless Patterns.

Another group! Pretty simple, pretty easy. Using a Butterick pattern, most likely with some modifications. I'm planning to change into street clothes for my limited class in the afternoon, which I am super excited about. I'm taking Abby's class on 18th century hair care and hair styling, and I don't want to waste the work I do in that class by dismantling the hairstyle after the class to change into my 1850s ball gown.

Ice Cream Social: Unknown 18th Century outfit
No idea yet what this outfit is going to be. It's probably going to be a floral cotton caraco ensemble, or the new Larkin and Smith pattern, depending on budget. 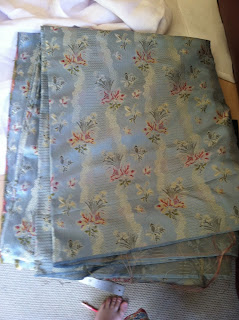 I picked up this great silk brocade at Delectable Mountain in Vermont. Totally lucky find, this stuff is F-A-N-C-Y, and I got it for less than half of what it's worth. I'm making it into an anglaise (drawn up because I only have 4 yards) with a solid petticoat, probably trimmed to hell in organza. Petticoat will most likely be pale yellow. I'm also going to make a big ass frilly cap to go with it. Basically I want to look like he 18th century threw up on me. 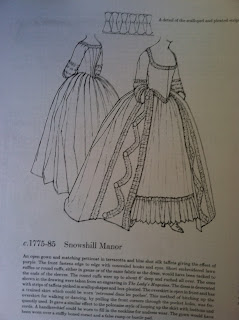 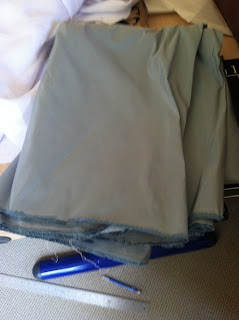 For the Gala, I'm going a bit more simple and elegant, rather than over the top frilly. I'm using a dress from Snowshill Manor in Patterns of Fashion as my inspiration, although given my frustration with scaling patterns, I'm probably just going to modify the JP Ryan anglaise. I bought an iron pleating punch on Etsy that Natalie is test driving right now. I'm gearing up for so much punching and gathering. I've got a great silk taffeta from Mood that's in between a steel and powder blue, and really shines under low light. 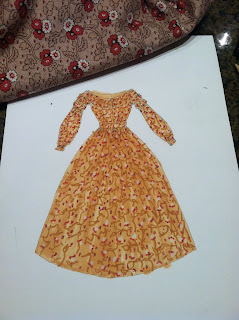 I have fabric and a plan for a cotton 1830s dress with bishop sleeves, which is a time-allowing project. I'm pretty comfortable with the Truly Victorian 1830s dress pattern at this point, so it's a quick project that can be squeezed in.
Posted by Kaila at 2:40 PM 2 comments:

Anyone with a Uniquely You dress form knows that while squishy and perfect for corseting, those forms have some weird boobs. Like, torpedo level weird.
I have several 18th century ensembles planned for Costume College this year, and trying to put my stays on my form made me realize that it was finally time to give her a new set of breasts.
I didn't have the suggested electric turkey slicer, so I just got a hacksaw from the shed and cut off the weird foam boobs. It's way easier to get these things out of their covers than it is to get them into them. After I put the cover back on, I filled the feet of a pair of pantyhose with rice, using my favorite and best fitting bra as a guide for size and shape. I then pinned the edges in place and stitched them down onto the cover.  I'm really happy with how they came out, and how well they work in stays.

I made the peach ball gown for the PEERS 12th Night ball in January. The ball gown was pretty much made during the first two weeks of my winter , continuing my unintentional tradition of a 2 week ball gown around Christmas. 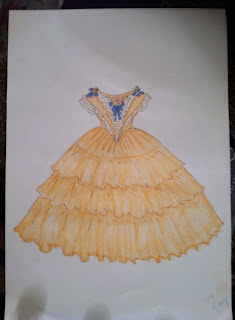 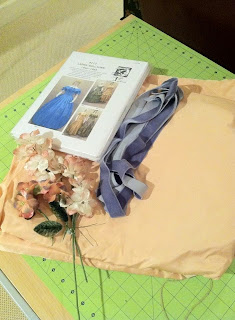 I found a great peach Donna Karen silk from Mood online, and it was only $17 a yard so I had to have it. It's not exactly a taffeta, more like a taffeta-satin hybrid because of some floats in the weave. My inspiration: I used the Laughing Moon ball gown pattern and it is a great pattern. The flared sleeves don't restrict the arms at all, making it perfect for dancing. 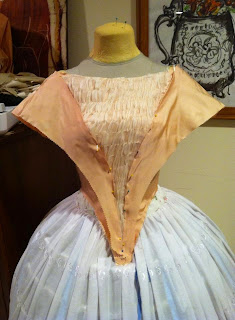 I put a ruched panel of silk organza down the front the of the bodice, as inspired by the fashion plate. I then trimmed it out with net lace, blue velvet ribbon, french brocade ribbon, and silk flowers 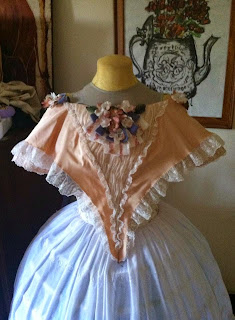 I made the tiered version of the skirt, which was a ton of gathering, but I really like the results. 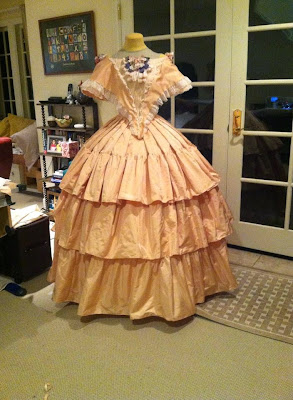 I made this dress originally for the ice cream social at Costume College 2014, and added an evening bodice for the August 2014 Gaskell ball. 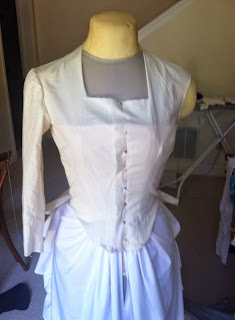 I used the Truly Victorian 1870s bodice pattern. I originally wanted to use the longer waist but this pattern is ridiculously long, even when trimmed, and I ended up not liking the look. I went for a straight, earlier waistline instead. 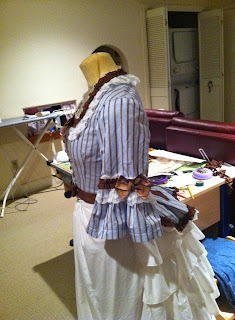 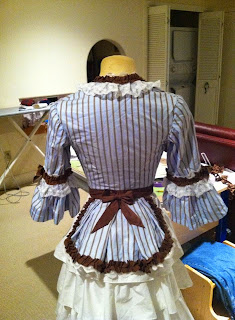 For the skirt and overskirt, I also used the Truly Victorian patterns. I lined the pouf of the overskirt with tulle for extra poofiness. 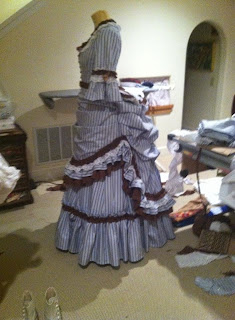 I had a good amount of fabric left over, so I decided to make an evening bodice to wear to Gaskells. I tried to use the Janet Arnold early 1870d 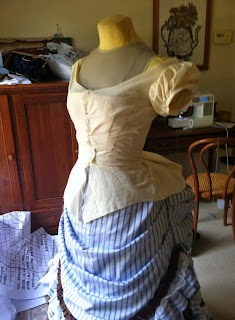 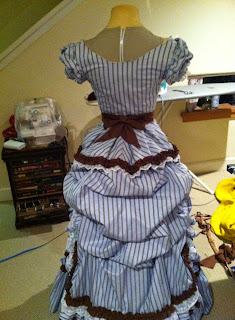 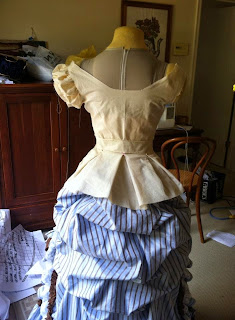 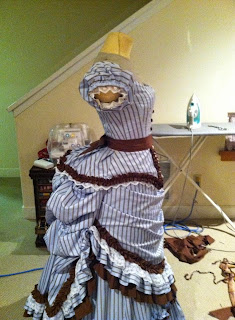 Materials: Cotton shirting, solid cotton, net lace, rayon ribbon, tulle for the pouf, twill tapes for bustle-ing
Cost: hahaha way too much but probably around $275 for the entire project?
Hours: Way too many to estimate
Accuracy: maybe 75%? I don't really mind the inaccuracies

Hi all! It's been 3 months shy of a year since I last posted, and that's mostly due to my laziness/crazy hectic life during the school year. Here's some things I've been working on:

That's really all I have to show for myself in the way of finished or mostly finished projects. I'm going to be breaking down my summer sewing plans on here some time in the near future.
Posted by Kaila at 10:51 AM 2 comments:

I'm back from costume college and it was fabulous! Before I unload all my pictures and a full summary, here are some teaser pictures 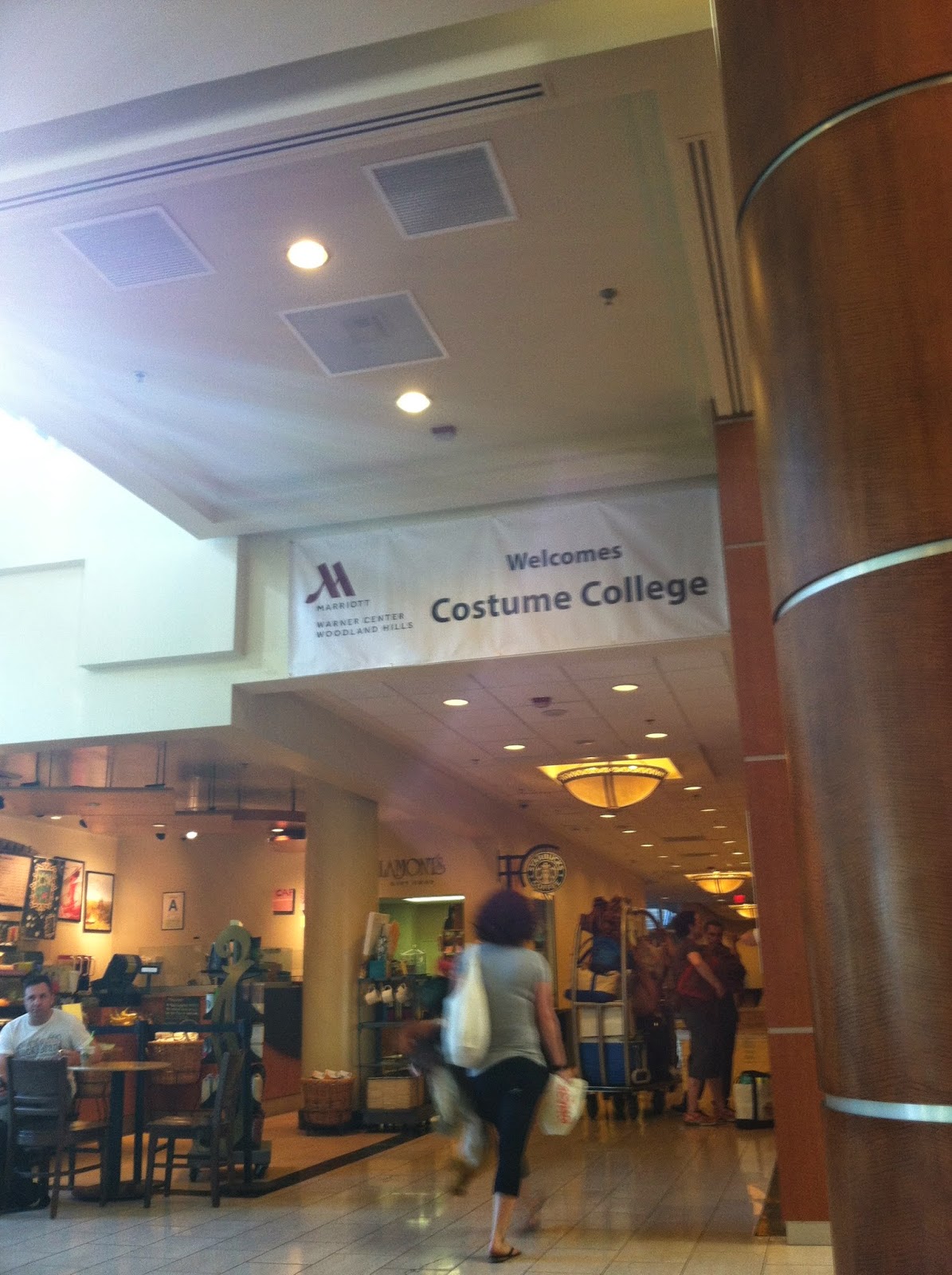 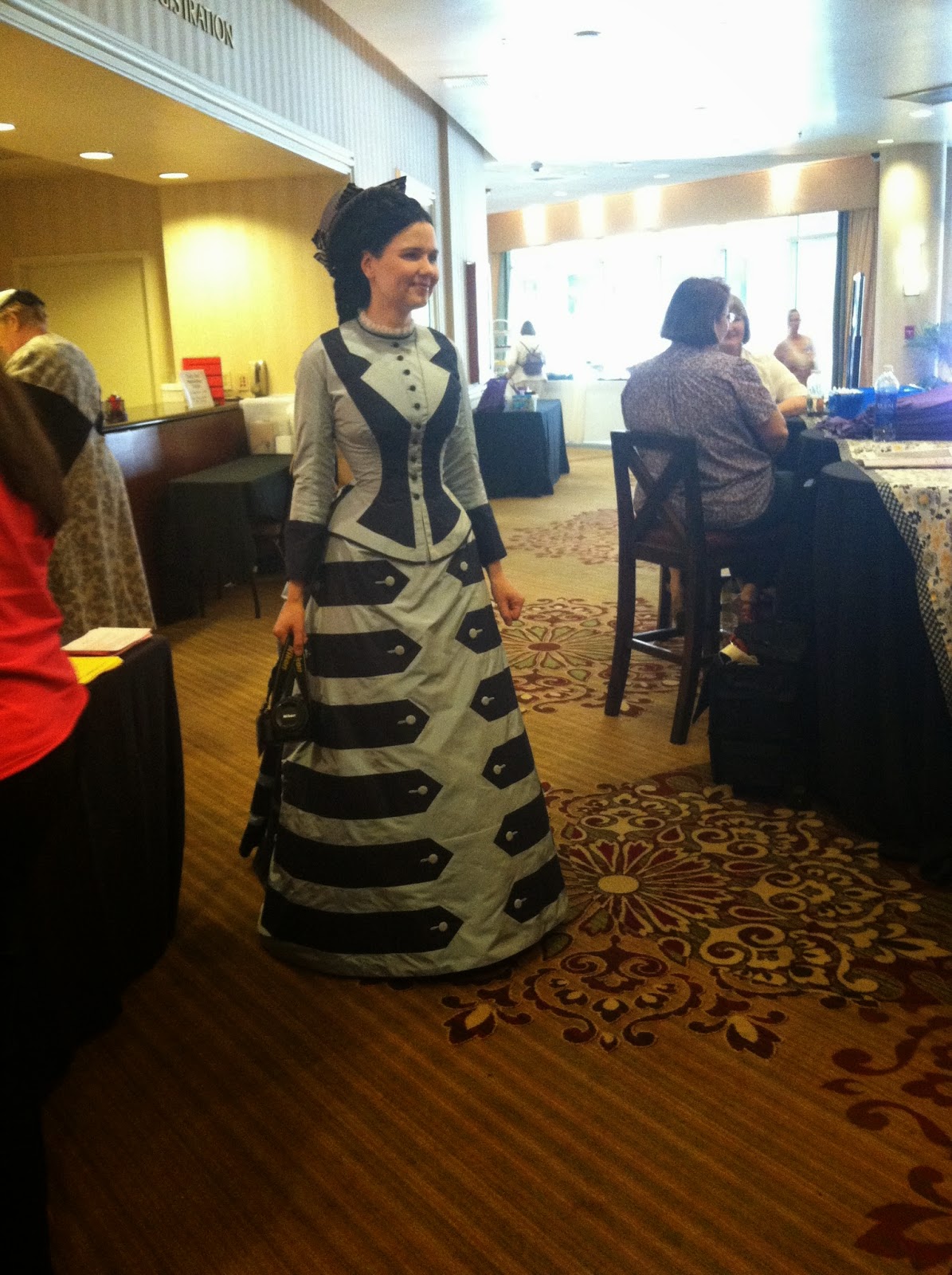 More to follow, including: more pictures, my plans for next year, and a whole bunch of catch up on projects

Find me here too!

Kaila
I'm a costumer who loves the Victorian period and dancing among many other things. I'm a harpist and a knitter as well.